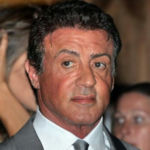 Why Is Sylvester Stallone Influential?

According to Wikipedia, Sylvester Enzio Stallone is an American actor and filmmaker. After his beginnings as a struggling actor for a number of years upon arriving to New York City in 1969 and later Hollywood in 1974, he won his first critical acclaim as an actor for his co-starring role as Stanley Rosiello in The Lords of Flatbush. Stallone subsequently found gradual work as an extra or side character in films with a sizable budget until he achieved his greatest critical and commercial success as an actor and screenwriter, starting in 1976 with his role as boxer Rocky Balboa, in the first film of the successful Rocky series , for which he also wrote the screenplays. In the films, Rocky is portrayed as an underdog boxer who fights numerous brutal opponents, and wins the world heavyweight championship twice.

Other Resources About Sylvester Stallone

What Schools Are Affiliated With Sylvester Stallone?

Sylvester Stallone is affiliated with the following schools:

What Are Sylvester Stallone's Academic Contributions?

Sylvester Stallone has made the following academic contributions: