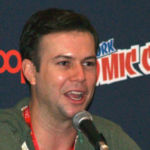 Why Is Taran Killam Influential?

According to Wikipedia, Taran Hourie Killam is an American actor, comedian, and writer. He is known for his television work on The Amanda Show, How I Met Your Mother, MADtv, New Girl, Saturday Night Live, and Single Parents. Killam is also known for his portrayal of a teen pop star in the 2004 Disney Channel Original Movie Stuck in the Suburbs. He voices the title character on the PBS children's cartoon series Nature Cat.

Other Resources About Taran Killam

What Schools Are Affiliated With Taran Killam?

Taran Killam is affiliated with the following schools: