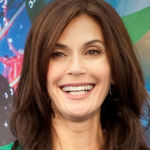 Why Is Teri Hatcher Influential?

According to Wikipedia, Teri Lynn Hatcher is an American actress best known for her portrayals of Lois Lane on the television series Lois & Clark: The New Adventures of Superman ; Paris Carver in the James Bond film Tomorrow Never Dies ; and Susan Mayer on the television series Desperate Housewives , for which she won the Golden Globe Award for Best Actress in a Musical or Comedy and three Screen Actors Guild Awards , and was nominated for a Primetime Emmy Award for Outstanding Lead Actress in a Comedy Series.

Other Resources About Teri Hatcher

What Schools Are Affiliated With Teri Hatcher?

Teri Hatcher is affiliated with the following schools:

What Are Teri Hatcher's Academic Contributions?

Teri Hatcher has made the following academic contributions: