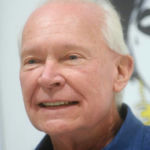 Why Is Terry Brooks Influential?

According to Wikipedia, Terence Dean Brooks is an American writer of fantasy fiction. He writes mainly epic fantasy, and has also written two film novelizations. He has written 23 New York Times bestsellers during his writing career, and has sold over 25 million copies of his books in print. He is one of the biggest-selling living fantasy writers.

Other Resources About Terry Brooks

What Schools Are Affiliated With Terry Brooks?

Terry Brooks is affiliated with the following schools:

What Are Terry Brooks's Academic Contributions?

Terry Brooks has made the following academic contributions: