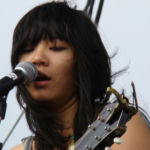 Why Is Thao Nguyen Influential?

According to Wikipedia, Thao Nguyen , also known as Thao, is an American singer-songwriter originally from Virginia and now based in San Francisco. She is the former lead singer, songwriter and figurehead of the defunct band Thao & the Get Down Stay Down, and has collaborated with Joanna Newsom and Andrew Bird. Outside of the band she has collaborated on projects with several artists including Merrill Garbus, The Portland Cello Project, and Mirah. Her music is influenced by folk, country, and hip hop.

Other Resources About Thao Nguyen