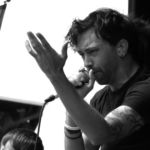 Why Is Tim McIlrath Influential?

According to Wikipedia, Timothy James McIlrath is an American rock musician. He is the lead singer, rhythm guitarist, songwriter and co-founder of the American punk rock band Rise Against. He is vegan and straight edge. Early and personal life McIlrath was born in 1978 to Jim and Michelle McIlrath. He attended Rolling Meadows High School in Rolling Meadows, IL. This was also the set for the music video, "Make It Stop ." In college , McIlrath majored in English and Sociology. In his junior year, he met Joe Principe at a Sick of It All concert. Principe asked McIlrath to sing over a few tracks that he and Dan Wleklinski had recorded. It was at this time that Transistor Revolt was formed and McIlrath left college.

Other Resources About Tim McIlrath

What Schools Are Affiliated With Tim McIlrath?

Tim McIlrath is affiliated with the following schools: