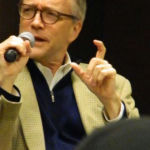 Why Is Tom Santopietro Influential?

According to Wikipedia, Tom Santopietro is an American author and Broadway theater manager. He worked for 25 years in the New York theater scene, managing over 30 Broadway shows.Tom Santopietro is the author of five books: The Sound of Music Story, The Godfather Effect: Changing Hollywood, America, and Me, Sinatra in Hollywood, Considering Doris Day , and The Importance of Being Barbra. A frequent media commentator in programs ranging from the PBS documentary The Italian Americans to the Jimmy van Heusen biography , Tom conducts monthly interviews for Barnes and Noble and lectures on classic films. Over the past thirty years he has managed more than two dozen Broadway shows.

Other Resources About Tom Santopietro

What Schools Are Affiliated With Tom Santopietro?

Tom Santopietro is affiliated with the following schools:

What Are Tom Santopietro's Academic Contributions?

Tom Santopietro has made the following academic contributions: