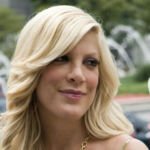 Why Is Tori Spelling Influential?

According to Wikipedia, Victoria Davey Spelling is an American actress and author. Her first major role was Donna Martin on Beverly Hills, 90210, beginning in 1990. She has appeared in made for television films, including A Friend to Die For , A Carol Christmas , The Mistle-Tones , both versions of Mother, May I Sleep with Danger? and The Last Sharknado: It's About Time . She has also starred in several independent films including The House of Yes , Trick , Scary Movie 2 , Cthulhu , Kiss the Bride and Izzie's Way Home . She reprised her role of Donna Martin in Beverly Hills, 90210 spin-off, BH90210, in 2019.

Other Resources About Tori Spelling

What Are Tori Spelling's Academic Contributions?

Tori Spelling has made the following academic contributions: