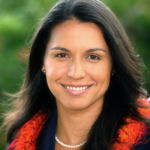 Why Is Tulsi Gabbard Influential?

According to Wikipedia, Tulsi Gabbard is an American politician and United States Army Reserve officer who served as the U.S. representative for Hawaii's 2nd congressional district from 2013 to 2021. Elected in 2012, she was the first Hindu member of Congress and also the first Samoan-American voting member of Congress. She was a candidate for the Democratic nomination in the 2020 United States presidential election.

Other Resources About Tulsi Gabbard

What Schools Are Affiliated With Tulsi Gabbard?

Tulsi Gabbard is affiliated with the following schools: