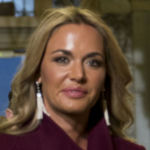 Why Is Vanessa Trump Influential?

According to Wikipedia, Vanessa Kay Trump is an American former model. She married Donald Trump Jr. in 2005 and they divorced in 2018. She was born in New York City. Early life She grew up in a townhouse on the Upper East Side of Manhattan and attended The Dwight School, a private school. Charles Haydon, her stepfather, was a lawyer whose clients included Marilyn Monroe and Broadway producer and real estate mogul Abe Hirschfeld. Her mother, Bonnie Kay Haydon, ran Kay Models, a modeling agency and is of Danish origin. Her maternal grandfather was Danish jazz musician Kai Ewans.

Other Resources About Vanessa Trump

What Schools Are Affiliated With Vanessa Trump?

Vanessa Trump is affiliated with the following schools: