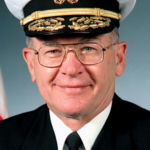 Why Is Vern Clark Influential?

According to Wikipedia, Vernon Eugene Clark is a retired admiral who served as the Chief of Naval Operations of the United States Navy. He retired on July 22, 2005, making his tenure of five years the second-longest serving CNO behind Arleigh Burke. He currently sits on the board of directors of Raytheon and SRI International. In November 2009, he was selected along with former Secretary of Veterans Affairs Togo West by Defense Secretary Robert Gates to lead the military investigation into the Fort Hood massacre.

Other Resources About Vern Clark

What Schools Are Affiliated With Vern Clark?

Vern Clark is affiliated with the following schools: