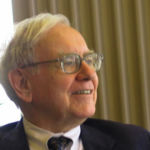 Why Is Warren Buffett Influential?

According to Wikipedia, Warren Edward Buffett is an American business magnate, investor, and philanthropist. He is currently the chairman and CEO of Berkshire Hathaway. He is considered one of the most successful investors in the world and has a net worth of over $114 billion as of February 2022, making him the world's eighth-wealthiest person.

Other Resources About Warren Buffett

What Schools Are Affiliated With Warren Buffett?

Warren Buffett is affiliated with the following schools: