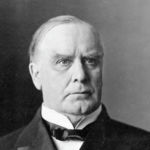 Why Is William McKinley Influential?

According to Wikipedia, William McKinley was the 25th president of the United States, serving from 1897 until his assassination in 1901. He was president during the Spanish–American War of 1898, raised protective tariffs to boost American industry, and rejected the expansionary monetary policy of free silver, keeping the nation on the gold standard.

Other Resources About William McKinley

What Schools Are Affiliated With William McKinley?

William McKinley is affiliated with the following schools: