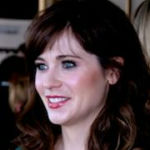 Why Is Zooey Deschanel Influential?

According to Wikipedia, Zooey Claire Deschanel is an American actress, musician, and songwriter. She made her film debut in Mumford and had a supporting role in Cameron Crowe's film Almost Famous . Deschanel is known for her deadpan roles in comedy films such as The Good Girl , The New Guy , Elf , The Hitchhiker's Guide to the Galaxy , Failure to Launch , Yes Man , 500 Days of Summer and Our Idiot Brother . She has also ventured into dramatic film territory with Manic , All the Real Girls , Winter Passing , Bridge to Terabithia , The Happening and The Driftless Area . From 2011 to 2018, she starred as Jessica Day on the Fox sitcom New Girl, for which she received nominations for a Primetime Emmy Award and three Golden Globe Awards.

Other Resources About Zooey Deschanel

What Schools Are Affiliated With Zooey Deschanel?

Zooey Deschanel is affiliated with the following schools: