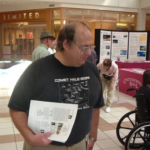 Why Is Alan Hale Influential?

According to Wikipedia, Alan Hale is an American professional astronomer, who co-discovered Comet Hale–Bopp along with amateur astronomer Thomas Bopp. Hale specializes in the study of sun-like stars and the search for extra-solar planetary systems, and has side interests in the fields of comets and near-Earth asteroids. He has been an active astronomer most of his life and currently serves as the president of the Earthrise Institute, which he founded, and which has as its mission the use of astronomy as a tool for breaking down international and intercultural barriers. The International Astronomical Union has named an asteroid in Hale's honor, 4151 Alanhale, in recognition of his numerous comet observations.

Other Resources About Alan Hale

What Schools Are Affiliated With Alan Hale ?

Alan Hale is affiliated with the following schools: