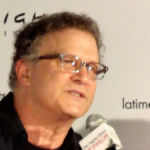 Why Is Albert Brooks Influential?

According to Wikipedia, Albert Brooks is an American actor, comedian and filmmaker. He received an Academy Award nomination for Best Supporting Actor for 1987's Broadcast News and was widely praised for his performance as a ruthless Jewish mobster in the 2011 action drama film Drive. Brooks has also played in Taxi Driver , Private Benjamin , Unfaithfully Yours , and My First Mister . He has written, directed, and starred in several comedy films, such as Modern Romance , Lost in America , and Defending Your Life . He is also the author of 2030: The Real Story of What Happens to America .

Other Resources About Albert Brooks

What Schools Are Affiliated With Albert Brooks?

Albert Brooks is affiliated with the following schools:

What Are Albert Brooks's Academic Contributions?

Albert Brooks has made the following academic contributions: