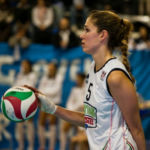 Why Is Alix Klineman Influential?

According to Wikipedia, Alexandra Rose "Alix" Klineman is an American beach volleyball, 2020 Summer Olympics gold medalist, and former indoor volleyball player. In high school she was the 2006 Gatorade National Player of the Year. She was a four-time All-American in volleyball at Stanford University, and the 2010 Volleyball Magazine national player of the year. She won a bronze medal with Team USA at the 2011 Pan American Games.

Other Resources About Alix Klineman

What Schools Are Affiliated With Alix Klineman?

Alix Klineman is affiliated with the following schools: