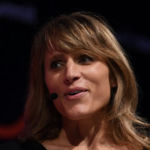 Why Is Allison Wagner Influential?

According to Wikipedia, Allison Marie Wagner is an American former competition swimmer, Olympic medalist, and former world record-holder. Early years Wagner was born in Gainesville, Florida. Her parents required her and her two brothers to participate in sports. Her brothers picked American football and soccer; she attempted ballet, softball and soccer before discovering that she was good at swimming. At the age of 7, she began her competition swimming career in Berlin, Germany, where her father was stationed in the U.S. Army. After her father retired from army service, her family moved to Gainesville, and she attended the International Baccalaureate program at Eastside High School in Gainesville. While in high school, Wagner swam for the Eastside swim team for one semester, and trained for national and international competition with the Florida Aquatics club team under coach Kevin Thornton.

Other Resources About Allison Wagner

What Schools Are Affiliated With Allison Wagner?

Allison Wagner is affiliated with the following schools: