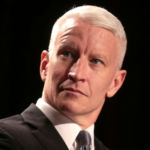 Why Is Anderson Cooper Influential?

According to Wikipedia, Anderson Hays Cooper is an American broadcast journalist and political commentator from the Vanderbilt family. He is the primary anchor of the CNN news broadcast show Anderson Cooper 360°. In addition to his duties at CNN, Cooper serves as a correspondent for 60 Minutes on CBS News. After graduating from Yale University with a Bachelor of Arts in 1989, he began traveling the world, shooting footage of war-torn regions for Channel One News. Cooper was hired by ABC News as a correspondent in 1995, but he soon took more jobs throughout the network, working for a short time as a co-anchor, reality game show host, and fill-in morning talk show host.

Other Resources About Anderson Cooper

What Schools Are Affiliated With Anderson Cooper?

Anderson Cooper is affiliated with the following schools:

What Are Anderson Cooper's Academic Contributions?

Anderson Cooper has made the following academic contributions: