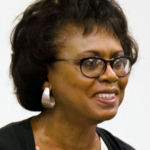 Why Is Anita Hill Influential?

According to Wikipedia, Anita Faye Hill is an American lawyer, educator and author. She is a professor of social policy, law, and women's studies at Brandeis University and a faculty member of the university's Heller School for Social Policy and Management. She became a national figure in 1991 when she accused U.S. Supreme Court nominee Clarence Thomas, her supervisor at the United States Department of Education and the Equal Employment Opportunity Commission, of sexual harassment.

Other Resources About Anita Hill

What Schools Are Affiliated With Anita Hill?

Anita Hill is affiliated with the following schools: