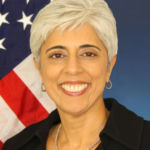 Why Is Arati Prabhakar Influential?

According to Wikipedia, Arati Prabhakar is an American engineer and the former head of DARPA, the United States Defense Advanced Research Projects Agency, a position she held from July 30, 2012 to January 20, 2017. She is a founder and the CEO of Actuate, a nonprofit organization. In 2022, Prabhakar was nominated to be director of the White House Office of Science and Technology Policy , to serve as the chief science advisor to President Biden.

Other Resources About Arati Prabhakar

What Schools Are Affiliated With Arati Prabhakar?

Arati Prabhakar is affiliated with the following schools: