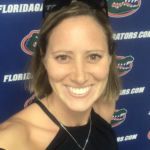 Why Is Ashley Schappert Influential?

According to Wikipedia, Ashley Carusone Schappert is an athlete, entrepreneur, film producer and Author. As an American competition swimmer she specialized in Individual Medley and butterfly events. She held 2 YMCA National SCY records in the 400IM and 200 butterfly and 4 YMCA National LCM records in the 200IM, 400IM, and 800 freestyle. Ashley competed in the 2004 and 2008 Olympic trials for the University of Florida. Ashley won the International Triathlon Union World Championships for her age group in 2001, 2 time Pan American Champion and 13 time USAT All-American.

Other Resources About Ashley Schappert

What Schools Are Affiliated With Ashley Schappert?

Ashley Schappert is affiliated with the following schools: