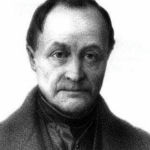 Why Is Auguste Comte Influential?

According to Wikipedia, Isidore Marie Auguste François Xavier Comte was a French philosopher and writer who formulated the doctrine of positivism. He is often regarded as the first philosopher of science in the modern sense of the term. Comte's ideas were also fundamental to the development of sociology; indeed, he invented the term and treated that discipline as the crowning achievement of the sciences.

Other Resources About Auguste Comte