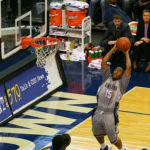 Why Is Austin Freeman Influential?

According to Wikipedia, Austin Mambu Freeman, Jr. is an American professional basketball player for San Carlos of the Dominican Torneo de Baloncesto Superior . He played college basketball at Georgetown University. High school & college career Freeman attended DeMatha Catholic High School in Hyattsville, Maryland until 2007. In his junior year at DeMatha he averaged 17.9 points, 7.1 rebounds and 3.4 assists per game, while in his senior year he improved his averages to 23.1 points, 7 rebounds and 4 assists per game. He was selected for the McDonald's All-American Game and for the Jordan Brand Classic in 2007.

Other Resources About Austin Freeman

What Schools Are Affiliated With Austin Freeman?

Austin Freeman is affiliated with the following schools: