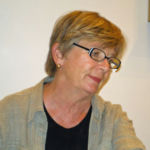 Why Is Barbara Ehrenreich Influential?

According to Wikipedia, Barbara Ehrenreich is an American author and political activist who has been called "a veteran muckraker" by The New Yorker. During the 1980s and early 1990s she was a prominent figure in the Democratic Socialists of America. She is a widely read and award-winning columnist and essayist, and author of 21 books. Ehrenreich is perhaps best known for her 2001 book Nickel and Dimed: On Getting By in America; a memoir of Ehrenreich's three-month experiment surviving on a series of minimum wage jobs. She is a recipient of a Lannan Literary Award.

Other Resources About Barbara Ehrenreich

What Schools Are Affiliated With Barbara Ehrenreich?

Barbara Ehrenreich is affiliated with the following schools: