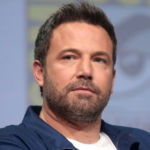 Why Is Ben Affleck Influential?

According to Wikipedia, Benjamin Géza Affleck-Boldt is an American actor and filmmaker. His accolades include two Academy Awards and three Golden Globe Awards. He began his career as a child when he starred in the PBS educational series The Voyage of the Mimi . He later appeared in the independent coming-of-age comedy Dazed and Confused and various Kevin Smith films, including Mallrats , Chasing Amy and Dogma . Affleck gained wider recognition when he and childhood friend Matt Damon won the Golden Globe and Academy Award for Best Original Screenplay for writing Good Will Hunting , which they also starred in. He then established himself as a leading man in studio films, including the disaster film Armageddon , the war drama Pearl Harbor , and the thrillers The Sum of All Fears and Changing Lanes .

Other Resources About Ben Affleck

What Schools Are Affiliated With Ben Affleck?

Ben Affleck is affiliated with the following schools: