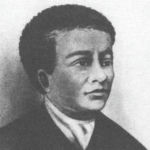 Why Is Benjamin Banneker Influential?

According to Wikipedia, Benjamin Banneker was an African-American naturalist, mathematician, astronomer and almanac author. He was a landowner who also worked as a surveyor and farmer. Born in Baltimore County, Maryland, to a free African-American mother and a father who had formerly been enslaved, Banneker had little or no formal education and was largely self-taught. He became known for assisting Major Andrew Ellicott in a survey that established the original borders of the District of Columbia, the federal capital district of the United States.

Other Resources About Benjamin Banneker