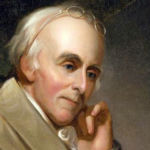 Why Is Benjamin Rush Influential?

According to Wikipedia, Benjamin Rush was a Founding Father of the United States who signed the United States Declaration of Independence, and a civic leader in Philadelphia, where he was a physician, politician, social reformer, humanitarian, educator, and the founder of Dickinson College. Rush was a Pennsylvania delegate to the Continental Congress. His later self-description there was: "He aimed right." He served as surgeon general of the Continental Army and became a professor of chemistry, medical theory, and clinical practice at the University of Pennsylvania.

Other Resources About Benjamin Rush

What Schools Are Affiliated With Benjamin Rush?

Benjamin Rush is affiliated with the following schools: