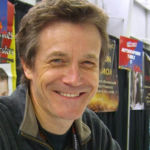 Why Is Bill Amend Influential?

According to Wikipedia, William J. C. Amend III is an American cartoonist. He is known for his comic strip FoxTrot. Early life Amend was born in Massachusetts and raised in Northern California. He attended high school in Burlingame, California where he was a cartoonist on his school newspaper. Amend is an Eagle Scout in the Boy Scouts of America. He graduated with a degree in physics from Amherst College in 1984.

Other Resources About Bill Amend

What Schools Are Affiliated With Bill Amend?

Bill Amend is affiliated with the following schools: