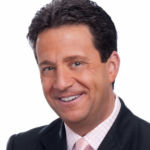 Why Is Bill Evans Influential?

According to Wikipedia, William Howard Evans is an American meteorologist and the former weatherman for WABC-TV, the ABC affiliate in New York City. Early career Evans's broadcasting career began at the age of 13 in his hometown of Meridian, Mississippi on WDAL Radio and WTOK-TV. He attended Mississippi State University, where he studied business administration, and Jackson State University, where he studied meteorology.

Other Resources About Bill Evans

What Schools Are Affiliated With Bill Evans ?

Bill Evans is affiliated with the following schools: