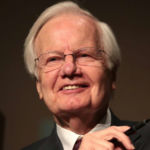 Why Is Bill Moyers Influential?

According to Wikipedia, Bill Moyers is an American journalist and political commentator. He served as the eleventh White House Press Secretary under the Johnson administration from 1965 to 1967. He was a director of the Council on Foreign Relations, from 1967-1974. He also worked as a network TV news commentator for ten years. Moyers has been extensively involved with public broadcasting, producing documentaries and news journal programs. He has won numerous awards and honorary degrees for his investigative journalism and civic activities. He has become well known as a trenchant critic of the corporately structured U.S. news media.

Other Resources About Bill Moyers

What Schools Are Affiliated With Bill Moyers?

Bill Moyers is affiliated with the following schools: