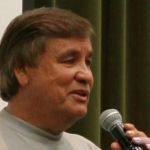 Why Is Billy Mills Influential?

According to Wikipedia, William Mervin Mills , also known as Tamakoce Te'Hila, is an Oglala Lakota former track and field athlete who won a gold medal in the 10,000 meter run at the 1964 Tokyo Olympics. His 1964 victory is considered one of the greatest Olympic upsets because he was a virtual unknown going into the event. He was the first non-European to win the Olympic event and remains the only winner from the Americas. A United States Marine, Mills is a member of the Oglala Sioux Tribe.

Other Resources About Billy Mills

What Schools Are Affiliated With Billy Mills?

Billy Mills is affiliated with the following schools:

What Are Billy Mills's Academic Contributions?

Billy Mills has made the following academic contributions: