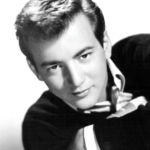 Why Is Bobby Darin Influential?

According to Wikipedia, Bobby Darin was an American singer, songwriter, multi-instrumentalist musician, and actor. He performed jazz, pop, rock and roll, folk, swing, and country music. He started his career as a songwriter for Connie Francis. He recorded his first million-selling single, "Splish Splash", in 1958. That was followed by "Dream Lover", "Mack the Knife", and "Beyond the Sea", which brought him worldwide fame. In 1962 he won a Golden Globe Award for his first film, Come September, co-starring his first wife, actress Sandra Dee.

Other Resources About Bobby Darin

What Schools Are Affiliated With Bobby Darin?

Bobby Darin is affiliated with the following schools: