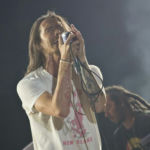 Why Is Brandon Boyd Influential?

According to Wikipedia, Brandon Charles Boyd is an American singer, songwriter, musician, author, executive producer and visual artist. He is best known as the lead vocalist of the American rock band Incubus. Early life Boyd graduated from Calabasas High School in 1994 and attended Moorpark College for two years before committing to Incubus. Brandon grew up in Calabasas, California with Ricky Taylor who inspired him to write music. His parents, Priscilla "Dolly" Wiseman and Charles Boyd, both of whom had experience in entertainment, with his father being a former Marlboro Man, had nurtured his artistic side since he was a child. Other notable family members include his younger brother, Jason Boyd, the former lead singer of the band Audiovent, his cousin Berto Boyd, an accomplished Flamenco guitarist and composer, as well as cousin Sam Boyd, a professional motocross rider. In an interview, Brandon explained that he had "yet to stumble across his best work" because he lacked the ability to read music.

Other Resources About Brandon Boyd

What Schools Are Affiliated With Brandon Boyd?

Brandon Boyd is affiliated with the following schools:

What Are Brandon Boyd's Academic Contributions?

Brandon Boyd has made the following academic contributions: