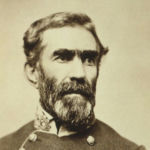 Why Is Braxton Bragg Influential?

According to Wikipedia, Braxton Bragg was an American army officer during the Second Seminole War and Mexican–American War and Confederate general in the Confederate Army during the American Civil War, serving in the Western Theater. His most important role was as commander of the Army of Mississippi, later renamed the Army of Tennessee, from June 1862 until December 1863.

Other Resources About Braxton Bragg

What Schools Are Affiliated With Braxton Bragg?

Braxton Bragg is affiliated with the following schools: