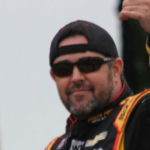 Why Is Brendan Gaughan Influential?

According to Wikipedia, William Brendan Gaughan is an American professional racing driver who has competed in off-road and stock cars. He is the grandson of Vegas gaming pioneer Jackie Gaughan and son of Michael Gaughan, a hotel and casino magnate.

Other Resources About Brendan Gaughan

What Schools Are Affiliated With Brendan Gaughan?

Brendan Gaughan is affiliated with the following schools: