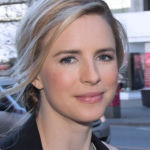 Why Is Brit Marling Influential?

According to Wikipedia, Brit Heyworth Marling is an American actress and screenwriter. She rose to prominence after starring in several films that premiered at the Sundance Film Festival, including Sound of My Voice , Another Earth , and The East , each of which she co-wrote in addition to playing the lead role. She co-created, wrote, and starred in the Netflix series The OA, which debuted in 2016.

Other Resources About Brit Marling

What Schools Are Affiliated With Brit Marling?

Brit Marling is affiliated with the following schools: