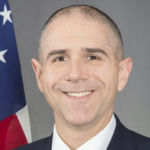 Why Is Carl Risch Influential?

According to Wikipedia, Carl Risch is an American lawyer and former government official who served as Assistant Secretary of State for Consular Affairs within the U.S. Department of State, as the acting chief of staff for the United States Citizenship and Immigration Services , and as Deputy Director of the Executive Office for Immigration Review within the U.S. Department of Justice. Risch was also a field office director for USCIS at the U.S. embassy in Seoul, South Korea and a Foreign Service Officer with the United States Department of State.

Other Resources About Carl Risch

What Schools Are Affiliated With Carl Risch?

Carl Risch is affiliated with the following schools: