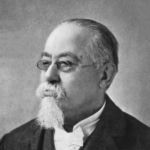 Why Is Cesare Lombroso Influential?

According to Wikipedia, Cesare Lombroso was an Italian criminologist, phrenologist, physician, and founder of the Italian School of Positivist Criminology. Lombroso rejected the established classical school, which held that crime was a characteristic trait of human nature. Instead, using concepts drawn from physiognomy, degeneration theory, psychiatry, and Social Darwinism, Lombroso's theory of anthropological criminology essentially stated that criminality was inherited, and that someone "born criminal" could be identified by physical defects, which confirmed a criminal as savage or atavistic.

Other Resources About Cesare Lombroso

What Schools Are Affiliated With Cesare Lombroso?

Cesare Lombroso is affiliated with the following schools:

What Are Cesare Lombroso's Academic Contributions?

Cesare Lombroso has made the following academic contributions: