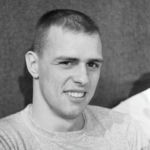 Why Is Chet Jastremski Influential?

According to Wikipedia, Chester Andrew Jastremski was an American competition swimmer, Olympic medalist and world record-holder. Jastremski attended Indiana University in Bloomington, Indiana, where he swam for Doc Counsilman's Indiana Hoosiers swimming and diving team. He and Counsilman invented the "whip kick" to replace the frog kick, previously used in the breaststroke. The whip kick minimized drag and accentuated Jastremski's very powerful shoulders and upper arms. Over the years, the original whip kick morphed into the breaststroke kick that uses the entire leg. He was featured on the January 29, 1962 cover of Sports Illustrated.

Other Resources About Chet Jastremski

What Schools Are Affiliated With Chet Jastremski?

Chet Jastremski is affiliated with the following schools: