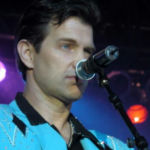 Why Is Chris Isaak Influential?

According to Wikipedia, Christopher Joseph Isaak is an American singer, songwriter, guitarist and occasional actor. He is widely known for his breakthrough hit and signature song "Wicked Game", as well as other songs such as "Blue Hotel", "Baby Did a Bad Bad Thing" and "Somebody's Crying". He is known for his reverb-laden rockabilly revivalist style and wide vocal range. His songs generally focus on the themes of love, loss, and heartbreak. With a career spanning four decades, Isaak has released a total of 12 studio albums, toured, and received numerous award nominations. He is often compared to Roy Orbison, Elvis Presley, Ricky Nelson, and Duane Eddy.

Other Resources About Chris Isaak

What Schools Are Affiliated With Chris Isaak?

Chris Isaak is affiliated with the following schools: