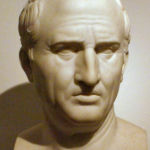 Why Is Cicero Influential?

According to Wikipedia, Marcus Tullius Cicero was a Roman statesman, lawyer, scholar, philosopher, and academic skeptic, who tried to uphold optimate principles during the political crises that led to the establishment of the Roman Empire. His extensive writings include treatises on rhetoric, philosophy and politics, and he is considered one of Rome's greatest orators and prose stylists. He came from a wealthy municipal family of the Roman equestrian order, and served as consul in 63 BC.

Other Resources About Cicero

What Are Cicero's Academic Contributions?

Cicero has made the following academic contributions: