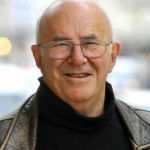 Why Is Clive James Influential?

According to Wikipedia, Clive James was an Australian critic, journalist, broadcaster and writer who lived and worked in the United Kingdom from 1962 until his death in 2019. He began his career specialising in literary criticism before becoming television critic for The Observer in 1972, where he made his name for his wry, deadpan humour.

Other Resources About Clive James

What Schools Are Affiliated With Clive James?

Clive James is affiliated with the following schools:

What Are Clive James's Academic Contributions?

Clive James has made the following academic contributions: