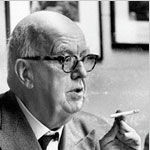 Why Is C. P. Snow Influential?

According to Wikipedia, Charles Percy Snow, Baron Snow, was an English novelist and physical chemist who also served in several important positions in the British Civil Service and briefly in the UK government. He is best known for his series of novels known collectively as Strangers and Brothers, and for The Two Cultures, a 1959 lecture in which he laments the gulf between scientists and "literary intellectuals".

Other Resources About C. P. Snow

What Schools Are Affiliated With C. P. Snow?

C. P. Snow is affiliated with the following schools:

C. P. Snow has made the following academic contributions: