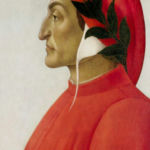 Why Is Dante Alighieri Influential?

According to Wikipedia, Dante Alighieri , probably baptized Durante di Alighiero degli Alighieri and often referred to simply as Dante , was an Italian poet, writer and philosopher. His Divine Comedy, originally called and later christened by Giovanni Boccaccio, is widely considered one of the most important poems of the Middle Ages and the greatest literary work in the Italian language.

Other Resources About Dante Alighieri

What Are Dante Alighieri's Academic Contributions?

Dante Alighieri has made the following academic contributions: