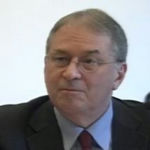 Why Is David Albright Influential?

According to Wikipedia, David Albright, M.Sc., is an American physicist and a weapons expert who is the founder of the non-governmental Institute for Science and International Security , its current president, and author of several books on proliferation of atomic weapons. Albright holds a Master of Science in physics from Indiana University and an MSc in mathematics from Wright State University. He has taught physics at George Mason University in Virginia.

Other Resources About David Albright

What Schools Are Affiliated With David Albright?

David Albright is affiliated with the following schools: