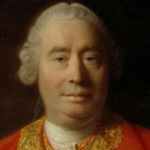 Why Is David Hume Influential?

According to Wikipedia, David Hume was a Scottish Enlightenment philosopher, historian, economist, librarian and essayist, who is best known today for his highly influential system of philosophical empiricism, scepticism, and naturalism. Beginning with A Treatise of Human Nature , Hume strove to create a naturalistic science of man that examined the psychological basis of human nature. Hume argued against the existence of innate ideas, positing that all human knowledge derives solely from experience. This places him with Francis Bacon, Thomas Hobbes, John Locke, and George Berkeley as a British Empiricist.

Other Resources About David Hume

What Schools Are Affiliated With David Hume?

David Hume is affiliated with the following schools:

What Are David Hume's Academic Contributions?

David Hume has made the following academic contributions: