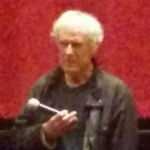 Why Is Dennis Cooper Influential?

According to Wikipedia, Dennis Cooper is an American novelist, poet, critic, editor and performance artist. He is perhaps best known for the George Miles Cycle, a series of five semi-autobiographical novels published between 1989 and 2000 and described by Tony O'Neill "as intense a dissection of human relationships and obsession that modern literature has ever attempted."

Other Resources About Dennis Cooper

What Schools Are Affiliated With Dennis Cooper?

Dennis Cooper is affiliated with the following schools: