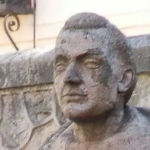 Why Is Domingo de Soto Influential?

According to Wikipedia, Domingo de Soto was a Spanish Dominican priest and Scholastic theologian born in Segovia , and died in Salamanca , at the age of 66. He is best known as one of the founders of international law and of the Spanish Thomistic philosophical and theological movement known as the School of Salamanca. He is also known for his contributions to Mechanical Physics.

Other Resources About Domingo de Soto

What Schools Are Affiliated With Domingo de Soto?

Domingo de Soto is affiliated with the following schools: