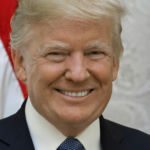 45th president of the United States

Why Is Donald Trump Influential?

According to Wikipedia, Donald John Trump is an American politician, media personality, and businessman who served as the 45th president of the United States from 2017 to 2021. Born and raised in Queens, New York City, Trump graduated from the Wharton School of the University of Pennsylvania with a bachelor's degree in 1968. He became president of his father Fred Trump's real estate business in 1971 and renamed it The Trump Organization. Trump expanded the company's operations to building and renovating skyscrapers, hotels, casinos, and golf courses. He later started various side ventures, mostly by licensing his name. From 2004 to 2015, he co-produced and hosted the reality television series The Apprentice. Trump and his businesses have been involved in more than 4,000 state and federal legal actions, including six bankruptcies.

Other Resources About Donald Trump

What Schools Are Affiliated With Donald Trump?

Donald Trump is affiliated with the following schools:

What Are Donald Trump's Academic Contributions?

Donald Trump has made the following academic contributions: